As an essential business, we are still servicing customers & following guidelines to protect the health of customers & employees. For your comfort, we offer in-home & virtual consultations.

Clear Channel - Hollywood, Florida
Over 300 employees 7 different stations into 1 location plus all computers.

Hogan Lovells - Miami, Florida
Moved over 44,000 sq. ft. of office space with less than 72 hrs notice for emergency renovations. Moved into storage and back after renovations.

Momentus Property Group - Aventura, Florida
Removed 100 fully furnished 3 to 5 bedroom units into storage for renovations until ready to be moved back. Videotaped every unit for exact return placement of contents.

Federal Express - Miami, Florida
Moved over 200 employees and computers into a new facility.

Quality Service at a Great Price! *Based on van & 2 men for 4 hrs + 1 hour travel. Costs will increase with move size and distance. 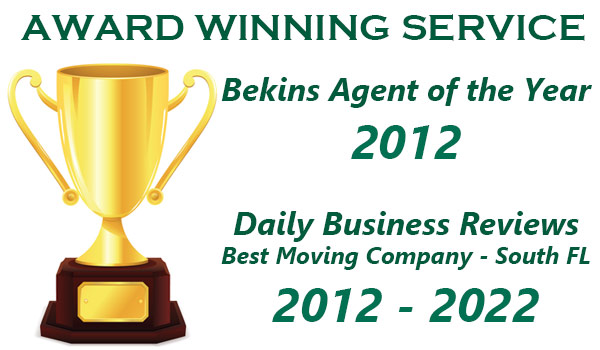 Moving can be challenging no matter what time of year, but the process can be complicated even more by the health hazards of a hot day. If it’s hot on the day of your move and...

Something to Consider Before You Leave